A recent post considered one way of including a job guarantee in the income-expenditure model. Doing so makes it possible to represent various macro effects of a job guarantee within the model. An obvious effect is that the program would deliver a degree of demand stabilization. An effect that is perhaps not quite so obvious is the way in which a job guarantee would ensure supply-side changes in the economy automatically impact on demand, actual output and employment. Before illustrating a few of these effects, the modified income-expenditure model will be briefly outlined and tailored to present purposes. A fuller discussion of the model is provided in the earlier post.

In the basic income-expenditure model, total output (Y) converges on the level Y = A/α, where A is net autonomous expenditure and α is the marginal propensity to leak from the circular flow of income to taxes, saving and imports. Introducing a job guarantee into the model modifies this to:

where Gg is the government’s spending on the job guarantee. For simplicity it is assumed that inputs into job-guarantee production are sourced from the domestic economy. The main preoccupation of the earlier post was to find an expression for this component of government spending, which adjusts automatically to variations in the number of people who accept the standing offer of a job. It was shown that within the model:

Since the present focus is on total output and employment, it is convenient to substitute the expression for job-guarantee spending given by (2) into (1). Rearrangement (eventually) gives:

Expressions (3) to (5) show that, once a job-guarantee is introduced, Y, Yb and Yg can be affected by exogenous changes on both the demand and supply sides of the economy. On the demand side, there is the familiar effect of exogenous changes in autonomous expenditure (A) or changes in the marginal propensity to leak from the circular flow of income (α). On the supply side, an exogenous change in the level of total employment (LF) will directly bring about changes in Yg and hence Y and subsequently Yb. Exogenous changes in other supply-side factors – the living wage (wL), the wage share in job-guarantee costs (ϕ) and productivity in the two sectors (ρb and ρg = wL) – make themselves felt through their impact on the size of the multipliers applying to A and LF.

Like other automatic stabilizers, a job guarantee would somewhat moderate fluctuations in total demand and output. In the following diagram, fluctuations in output are generated by arbitrarily letting private investment cycle between a high of 35 and a low of 25, beginning and ending at 30. The marginal propensity to leak is assumed to be 0.5, productivity in the broader economy 2, and the wage share in job-guarantee costs 0.67. Full employment is set at 100. Net autonomous spending other than private investment is set to 67 in the absence of a job guarantee, 64 when the job-guarantee wage is 0.5 and 58 when the job guarantee wage is 1. These values for net autonomous spending other than private investment are chosen to ensure that the initial and final levels of output are the same for the three scenarios, since the focus here is on illustrating the dampening of fluctuations. 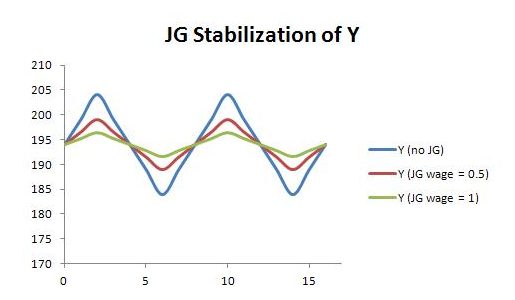 Fluctuations in the economy as a whole (represented by Y) are dampened more than fluctuations in the broader economy (represented by Yb). The greater volatility of Yb is illustrated in the next diagram. The values for the parameters and private investment are the same as in the previous diagram. Net autonomous spending other than private investment is set to 62 (rather than 58) when the living wage is 1, but given the same settings as before in the other scenarios. 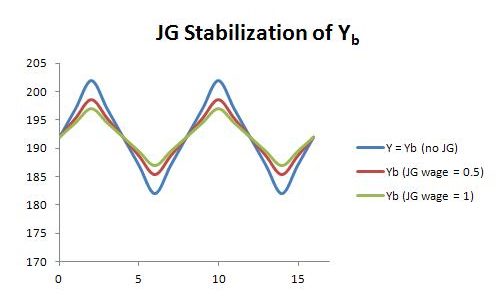 To a significant degree workers would be sheltered from the volatility in the broader economy through variations in job-guarantee employment: 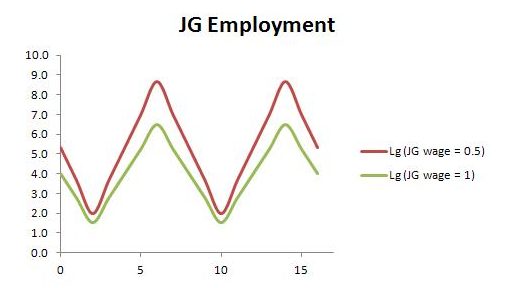 From a Keynesian or Kaleckian perspective, a mere increase in potential output (such as through an increase in labor-force participation or an improvement in productivity) does not necessarily bring about an automatic increase in output and employment. The greater productive potential is only realized if demand happens to be sufficient to sustain the higher level of output.

The job guarantee introduces a mechanism through which an increase in labor-force participation directly initiates an expansion of demand, actual output and employment. The causation, in these instances, runs from individual decisions to enter the labor force to accept the job-guarantee offer, to an increase in employment, to an activated expenditure by government on the program and increased income and output, to multiplier effects in the broader economy.

Similar effects can be partially present under some other policy measures, though the effects are likely to be weaker and less direct. For instance, when government pays an unemployment benefit that is not contingent on prior employment (this occurs in Australia, for instance), a decision by a jobless person to enter the labor force activates, subject to administrative checks and with a delay, a benefit payment. This does not represent a direct addition to demand because the benefit payment is treated as a ‘transfer’ (or negative tax) in the National Accounts. Even so, to the extent the benefit payment is used for consumption expenditure (and mostly it will be), there will be an impact on demand with a subsequent multiplier impact on the economy. Such a policy therefore does enable a supply-side change to have an impact on demand, actual output and employment, though the channel is less direct. If the benefit is means-tested (this is the case in Australia), the channel will be narrower than otherwise.

Under a job guarantee, exogenous growth of the labor force would cause an increase in output and employment. The increase in output would be enabled by an automatic expansion of job-guarantee spending and an inducement of additional private consumption. Suppose, initially, that there is no change in the assumed behavior of other exogenous variables or parameters. In that case, although employment in the broader economy would expand, it would not keep pace with the expansion of the job-guarantee sector. This is illustrated in the next two diagrams. It is assumed that the level of employment associated with full employment (LF) grows by 1 percent each period. The other exogenous variables and parameters take the same values as in earlier examples except that the living wage paid to job-guarantee workers is always 0.5 in the following scenarios. 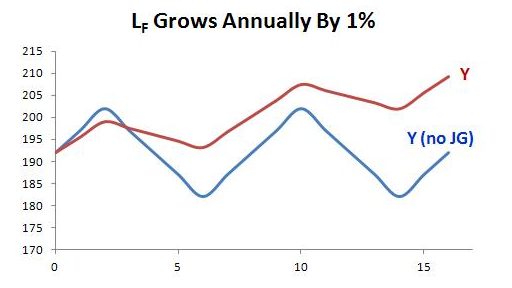 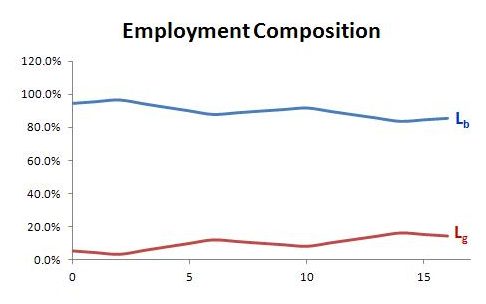 For employment in the broader economy to grow in line with total employment, it would be necessary for autonomous spending to keep pace with the growth in the labor force. In the next two diagrams, it is assumed that autonomous spending other than private investment grows by the same rate as the labor force. Growth in private investment is also assumed to occur, but with an arbitrary delay of four periods. 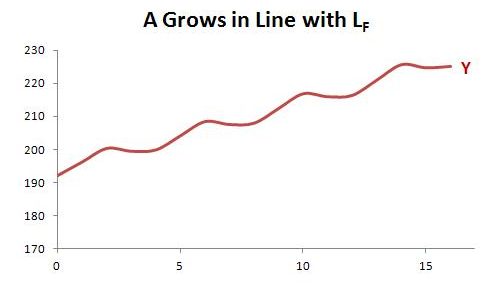 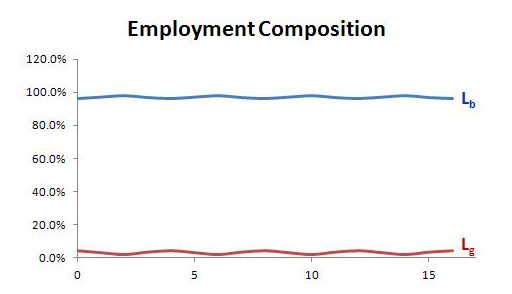 The automatic translation of extra supply potential into actual demand, output and employment seems quite an interesting feature of the job guarantee.

Introductions to the income-expenditure model