One way to conceive of money is as an IOU (“I owe you”) that is denominated in a nation’s unit of account and deemed acceptable by somebody other than its issuer. Anyone can attempt to issue an IOU. The difficulty, as the economist Hyman Minsky emphasized, is in getting it accepted.

Suppose you turn up at a supermarket, fill a shopping cart and proceed to the checkout. Rather than pulling cash or a credit card out of your pocket, you hand to the cashier a piece of paper on which you have jotted the words, “IOU $57.25”. You declare confidently that it is your own personal IOU. Chances are you will receive a frown or a chuckle. If you persist, a manager might be called over to explain that your personal IOU is not accepted as money in this particular supermarket chain.

The manager might mention that they do issue gift vouchers to the value of $100 and accept these in payment. These are the supermarket chain’s IOU. But, as it turns out, you don’t have any of these.

Fortunately you do have some dollar bills handy, which the manager would be pleased to accept. Dollar bills are an example of ‘government money’. Or maybe you offer to write a check or use EFTPOS. If so, you are agreeing to transfer an amount from your bank account to that of the supermarket chain. The deposit in your account is an example of ‘deposit money’, a bank’s IOU. This would be equally acceptable to the manager.

Evidently there are all kinds of different monies (different kinds of IOUs), but some are more widely accepted than others. Your trusted neighbor might be willing to trade with you in personal IOUs; strangers, not so much.

What is it about the money of government or a bank that makes it more widely accepted in the community? To answer that, we need to look a little more closely at each in turn.

A national government is well placed to ensure acceptance of its own money. Governments that choose to issue their own money are typically able to give it a central role, domestically, as the national currency. Prominent examples include the Chinese Yuan, US Dollar, Japanese Yen, British Pound, Brazilian Real and Russian Ruble.

The key to ensuring acceptance of a national currency is in the state’s power to tax. By specifying that taxes and other obligations to the state must be settled in government money, the government creates a need for individuals and businesses to obtain the currency.

It may be wondered in what sense government money is an IOU. What, in other words, is the government’s obligation or promise when it issues the currency? Among its obligations is the promise to accept its own money (IOU) back again in payment of taxes.

By way of analogy, suppose that your neighbor mows your lawn while you are away on holiday and you pay with a personal IOU, denominated in dollars. What you are doing is agreeing to accept back, in the future, your own IOU as payment for a service you will perform for your neighbor. Perhaps in the future you will wash your neighbor’s car and allow your neighbor to pay with the IOU you previously issued. So your promise, in issuing an IOU, is to accept it back at some later date in payment for services you agree to perform.

Similarly, the government pays for various services with its money (IOU). It uses its money to pay teachers, medical practitioners, police officers and many other types of workers for their labor services. It also uses its money to pay businesses for various goods and services. These labor services and business activities are performed for the benefit of the community. The government undertakes to accept its own money (IOU) back from the community as payment for the provision of these goods and services.

The tax obligation is far from the only reason that we are prepared to accept the national currency. But it is the basis of our need to obtain it. Once this basic need is created, even people who pay no taxes will be willing to accept the currency, because of the established demand for it. And, for convenience, we will use the currency for much more than just paying our taxes. Once a demand for the currency is established, it is safe and convenient for buying and selling as well as for saving.

Banks also create their own money. This is in the form of deposits, denominated in a nation’s money of account. A deposit is a bank’s IOU to convert bank money into currency (government money) at a deposit holder’s request, either on demand or after some duration of time. Most definitions of money include checking accounts, sometimes called demand deposits. These are bank deposits that can be converted into government money whenever the account holder demands it. When we use EFTPOS to direct a bank to transfer funds from our account to the account of a business in exchange for goods and services, we are making use of deposit money.

Banks are in a special relationship with government. They are required to convert deposits to government money in the form of hard currency (notes and coins) at par. In most countries, demand deposits are guaranteed through government provision of deposit insurance. It is possible for government to provide such a guarantee because of the central bank’s unlimited capacity to act as lender of last resort. Whenever banks find themselves short of currency, they can always borrow it from the central bank on terms specified by the central bank.

The requirement to convert at par in combination with the protection to account holders provided by deposit insurance ensures that $1 of deposit money is in most respects equivalent to $1 of government money. Since we have a need for government money, and bank money is “as good as currency”, we will readily accept bank money as well.

There is another important aspect of the relationship between commercial banks and government. Banks are required to hold accounts with the central bank (the government’s monetary agent). These accounts hold a special kind of government money called reserves. The accounts themselves are referred to as reserve accounts. The general public (referred to as the non-bank public) has no direct access to reserves. Only banks do. Banks can only use them for transactions among themselves and with the central bank.

Reserve balances play a key role in the monetary system because they are required for final settlement of transactions, including our transactions with government. Although we usually pay taxes and buy goods and services with bank money, final settlement only occurs once the central bank has adjusted reserve accounts to eliminate claims of banks on each other. At the end of any given day, some banks will owe others as a result of transactions occurring during the day. The central bank will need to delete reserves from the accounts of some banks and mark up the reserve accounts of other banks.

Since final settlement of transactions must occur in government money (reserves), banks must have access to sufficient reserve balances on our behalf. The banks need reserves for settlement purposes and we need the banks because the government gives them access to reserves. 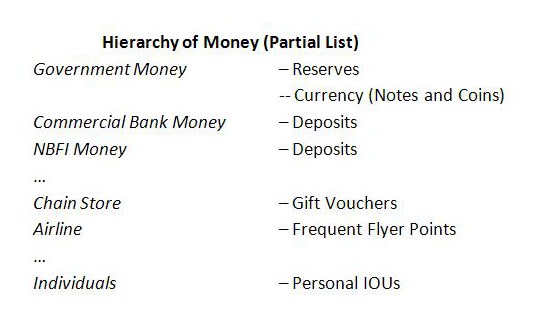 Scholarly treatment of the topic