Now that we have introduced ‘government money‘ and ‘commercial bank money‘, we are in a position to understand in basic terms how fiscal policy (government spending and taxing) is conducted and its direct financial effects. At this stage, the treatment is still cursory. There are more details that can be added in at a later time.

To see this, consider the key changes to financial assets and liabilities that occur if the government pays wages of $1,000 into Minnie Motza’s account at River Bank. (Other balance-sheet changes are left out to highlight the points presently under discussion.) 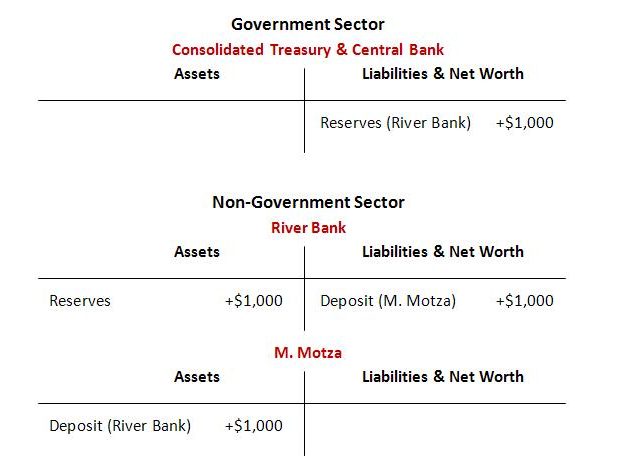 We can determine the overall financial impact of the government spending by considering its effects on each non-government entity.

On the one hand, River Bank’s net position is unchanged. The bank has extra reserves, which is its asset, but this is exactly offset by the new deposit, which is its liability.

Minnie, on the other hand, has a new asset (her deposit) with no offsetting liability.

The change in net financial assets, as presented so far, equals the change in reserves of $1,000.

Taxes have a financial impact opposite to that of government spending. If Minnie Motza pays $300 in taxes, this amount will be debited from her account at River Bank, and $300 of reserves will be debited from River Bank’s account with the central bank. The net effect will be a reduction in non-government net financial assets. For River Bank, the impact is neutral. Its liability (Minnie’s deposit) is reduced by $300, but its asset (reserves at the central bank) is reduced by the same amount. Minnie, however, has less financial assets than before, since her account now has a smaller balance. Offsetting this is a reduction in the government’s liabilities (since there are less reserves in River Bank’s account with the central bank).

In most countries, governments neutralize the fiscal impacts on reserves by buying or selling treasuries (or government bonds). This can involve the fiscal authority issuing new treasuries. Or it can involve the monetary authority buying or selling previously-issued treasuries. In either case, these actions relate to monetary policy. They enable the central bank to target a short-term interest rate. We will get to this in a later post.

In the case of a fiscal deficit, the government’s sale of treasuries means that non-government will hold its extra financial assets in the form of treasuries rather than reserves. This is akin to an individual switching funds from a checking account (or current account), which attracts little or no interest, to a savings account (or term deposit) that pays interest.

In the case of a fiscal surplus, the central bank’s purchase of previously-issued treasuries means that non-government will possess less treasuries rather than less reserves.

The key takeaway is that government spending adds net financial assets, whereas taxes subtract them.

The reason for this is that all other assets have an offsetting liability within the non-government sector.

The only way non-government can acquire net financial assets is for government to issue more cash, reserves and treasuries than it imposes in taxes. This occurs when government spends more than it taxes.