As a preliminary exercise, it may be instructive to modify the familiar Keynesian cross diagram to include the effects of a job guarantee within a simple short-run framework. The diagram includes two key schedules. The first is a 45-degree line showing all points for which actual expenditure equals actual income. The second is a line with lesser slope depicting the level of planned expenditure (total demand) at each level of income. Under appropriate conditions, the two schedules intersect at a steady-state level of income.

Some assumptions are made for simplicity. In particular, the following variables and parameters are taken as exogenously given throughout the series:

In constructing the Keynesian cross diagram, the main task is to specify the characteristics of the demand schedule. In particular, the aim is to express total demand as a function of total income and graph the result, with total income represented along the horizontal axis and expenditure along the vertical axis. To this end, total demand will be considered the sum of three broad components: induced private consumption CI, job-guarantee spending Gj and autonomous demand A.

The entirety of Gj adds directly to demand because of the simplifying assumption that all job-guarantee spending is on output produced within the domestic economy (no equipment or materials are imported).

Autonomous demand includes all exogenous spending on the economy’s output, whether by domestic households, firms and government or by foreigners, and is considered net of exogenous taxes and exogenous imports. Autonomous demand is not directly related to current income and, for the purposes of the model, is simply taken as given. Graphically, it is represented by a horizontal straight line with vertical intercept (0,A), indicating that this component of planned expenditure remains constant over all possible levels of income.

Maximum possible output is the output that conceivably could be produced if all employment were located in sector b. This notional level of output depends only on sector b productivity (ρb) and total employment (L), both of which are assumed exogenous:

Substituting this expression for maximum output into (2.3) enables us to write job-guarantee spending as a function of total income:

Since sector b productivity and total employment are simply taken as given, the functional form of (2.5) will depend only on q. Job-guarantee spending will be a linear function of Y if q is a constant.

If the quotient on the right-hand side is constant, q will also be constant.

The numerator of (2.6) is job-guarantee spending, which can be written

The denominator of (2.6) is the output gap. This gap is created by the necessity, relating to the needs of price stability, for policymakers to maintain a degree of slack in the broader economy. This causes some employment to be located in sector j, where productivity (defined to be equal to wj) is lower than in the broader economy (ρb). For every unit of employment located in sector j, there is forgone output of ρb – wj. Accordingly,

Substituting the expressions for job-guarantee spending and the output gap given in (2.7) and (2.8) into the equation for q appearing in (2.6) gives

Under present assumptions all elements on the right-hand side of (2.9) are exogenously given, making q a constant. This, in turn, makes job-guarantee spending, as expressed in (2.5), a linear function of total income with vertical intercept (0,qρbL), horizontal intercept (ρbL,0) and negative slope -q. The negative slope represents the inverse relationship between job-guarantee spending and total income. The government’s spending on the job guarantee declines as income grows and rises when the economy contracts.

Total demand is simply the sum of its three broad components. Since all these components – induced private consumption, job-guarantee spending and autonomous demand – are linear functions of Y, so too is total demand.

and substituting a suitable expression for j. Since j is defined as job-guarantee spending divided by total income, the desired equation can be found by dividing both sides of (2.5) by total income. This gives j as a function of Y:

This expression is a little more cumbersome than (2.10) but easy to understand and straightforward to graph. It shows total demand to be a straight line with vertical intercept (0,qρbL+A) and slope 1 – α – q.

Steady state. The point of intersection between the 45-degree line and the demand function can be found by substituting the right-hand side of (2.12) for demand in the equilibrium condition Y = Yd and solving for Y. This gives the level of steady-state income:

The inclusion of a job guarantee introduces a couple of points of difference with respect to the base model without a job guarantee. One difference is that even if autonomous demand were zero, the demand function’s vertical intercept would still be positive so long as total employment and sector b productivity were both positive because of the qρbL term in (2.12). Another difference is that the demand function need not necessarily be upward sloping but in principle can be upward sloping, horizontal or downward sloping depending on the values of α and q.

With the demand function now specified it is straightforward to construct the Keynesian cross diagram. The first figure below shows the constituent parts of total demand as well as its overall level. The demand schedule intersects the 45-degree line at Y*, which is the steady-state level of income. In fact, under present assumptions, most notably that autonomous demand is constant rather than growing over time, the economy is stationary at income level Y*. The steady-state level of income only changes when there is a change in one of the parameters or exogenous variables. 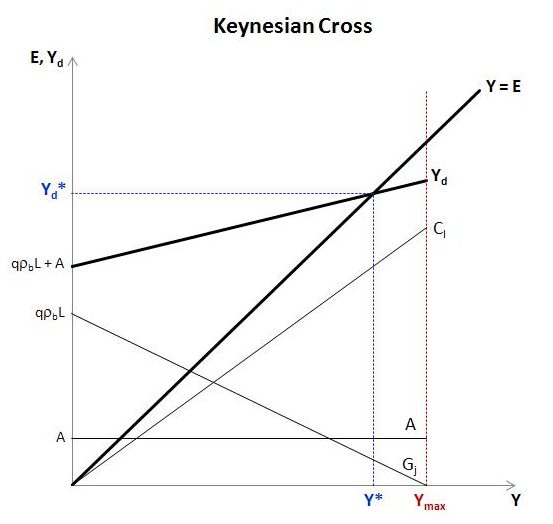 The property that the demand function always has a slope less than one is critical to the system’s dynamic stability. It ensures that whenever the economy is at a level of output other than Y*, the tendency will be for the economy to return to the steady state. 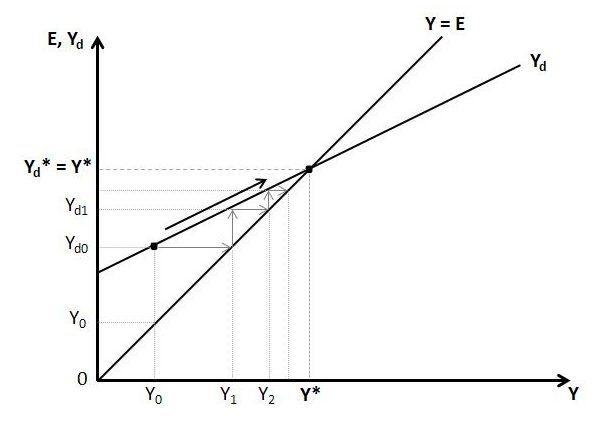 In the exaggerated scenario presented firms have produced output of Y0. This falls short of demand Yd0. In the initial instance, firms cater to the excess demand by running down inventories. They then interpret this unexpected depletion of inventories as a signal to expand production.

In general, it can be assumed that firms will alter the level of production by some proportion λ of the excess demand. For simplicity, the diagram is constructed on the assumption that λ = 1, which means that firms increase output in the next time step by the full amount of excess demand in the present time step. Accordingly, in the first time step output is expanded from Y0 to Y1.

This does not immediately restore the economy to the steady state because the expansion of output, by creating a higher flow of income, induces an additional change in demand. On the one hand, private consumption is positively affected; on the other, job-guarantee spending declines. In the particular scenario depicted, the demand schedule is upward sloping. This means that the boost to induced private consumption outweighs the impact on job-guarantee spending. The combined effect on demand is represented as a movement up along the demand schedule to the point (Y1,Yd1).

At output Y1 there is once again some excess demand. However, there is less excess demand than previously because of the important property that the demand schedule has slope of less than 1. This, together with the assumption that qρbL + A is positive, is sufficient to engender (in the absence of exogenous shocks) a general tendency for the economy to adjust toward the steady-state level of income Y*. Given time, in other words, output will catch up to demand.

The economic reason for the demand function’s slope being less than 1, which along with the assumed behavior of firms in response to excess demand or supply is the basis for any tendency toward a steady state, is that part of any additional income drains to taxes, saving and imports (the fraction α) and some job-guarantee spending is withdrawn (a fraction q) due to net migration of workers into the broader economy. This ensures that, when the economy is outside the steady state, the necessary variations in production and the changes in demand they induce are smaller at each subsequent step of the adjustment process, with the effect that the impacts on output and demand get smaller and smaller, vanishing in the limit, as the steady state is approached.