Government spending has two immediate and direct macro effects. It:

This is the case whether the central bank is (A) permitted to purchase government bonds directly from the fiscal authority (‘overt monetary financing’) or instead (B) is required to buy them from the private sector (currently the procedure under “normal” circumstances in many countries). It is also true if (C) the government simply spends without issuing bonds and pays its policy rate (which can be zero) on reserve balances.

Procedure B is far more convoluted than either of the alternatives, for no real public purpose. An earlier post traces through six steps (identified by Scott Fullwiler) that are involved when the US government requires itself to match net spending with bond sales to the private sector. The effects are presented in terms of simplified balance sheets of government agencies (the central bank and fiscal authority) and members of the non-government (primary dealers, commercial banks, spending recipients).

In step 1, the monetary authority (central bank) would buy new bonds issued by the fiscal authority (the Treasury). It would pay for these by crediting the Treasury’s account, held at the central bank. 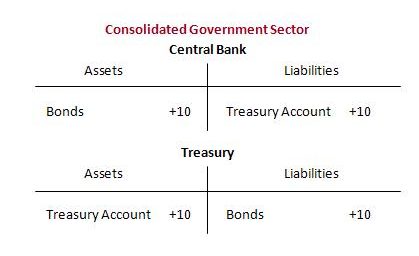 This initial step has no impact on non-government. Nor does it alter the net financial position of the consolidated government sector as a whole. The assets and liabilities of both the central bank and Treasury rise by 10. 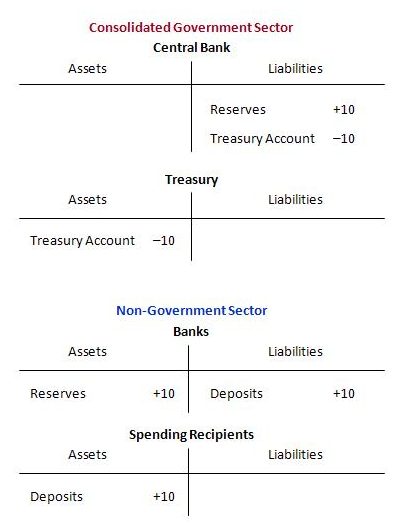 For the government sector as a whole, there is a net decrease in financial assets. On the one hand, the central bank’s net position is unaffected. It has an additional liability in the form of extra reserve balances held by banks. But this is offset by an equal reduction in its liability to the Treasury. On the other hand, the Treasury’s net financial assets decline by the amount of the government spending. (The Treasury will have additional real assets in the form of the goods and services purchased with the government spending. Since the focus here is on the net financial position of each sector, this is not shown above.) Overall, the consolidated government sector’s liability to non-government increases by the amount of the newly issued reserves.

The twofold effect of government spending would also be the same if government did away with the fiction of government “borrowing” altogether and simply conducted the following single-step operation in which the policy rate is paid on reserve balances: 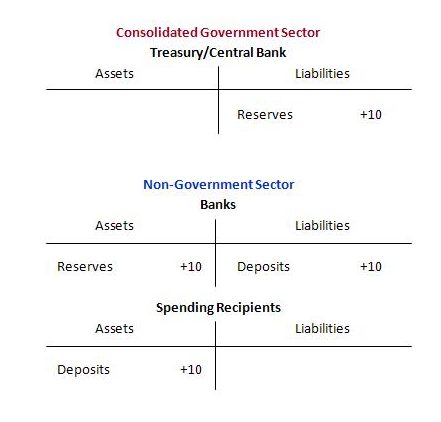 In this approach, the Treasury or the central bank, or a merged government agency, would spend simply by adding reserves to the banking system and instructing banks to credit the accounts of spending recipients. This would do away with the fiction of the government needing to “borrow” and also make clear that it is the act of government spending itself that creates government money in the form of reserves. (Once again, the real assets acquired by government and the extra net worth for non-government are left out to make clear the increase in non-government net financial assets.)

Benefits of the simpler procedures

Both simpler procedures (interest on reserves and overt monetary financing) are superior to the practice of selling Treasury debt to the private sector, and for a number of reasons. The procedures would:

In addition, overt monetary financing would remove a form of corporate welfare. It would stop interest payments on risk-free financial assets going into private hands whenever government net spends (profits of the central bank are turned over to the Treasury). The same will be true of interest on reserves whenever the policy rate is set to zero.

It can be noted, in closing, that adopting the simpler procedures would not prevent government from selling bonds to non-government for other purposes, such as to provide non-government with alternative saving vehicles, if this was deemed desirable. But there is no need for these asset swaps, if pursued, to be entwined in short-term interest rate management or be framed as the government “borrowing” from the private sector what it alone can issue. Nor should such bond issuance be tied to government net spending. Any decision by government to offer bonds to savers is at its discretion and not necessitated by its own spending behavior.