I’ve been thinking about the job guarantee as it is envisaged by proponents of Modern Monetary Theory (MMT). My focus has been on various quantity effects of the policy that can be considered using the standard income-expenditure model as a base (for preliminary posts along these lines, see here and here.) Since the income-expenditure model takes the general price level as given, it does not directly shed light on the aspects of a job guarantee that would pertain to price stability. To provide some context for a possible future discussion of quantity effects, it is perhaps worth summarizing how the job guarantee would moderate price pressures. Clear statements of the MMT position on the topic can be found in a billy blog post (here) and closely related academic articles by Bill Mitchell (here) and Warren Mosler (here).

At the present time, of course, there is no job guarantee in the comprehensive form articulated by its proponents. The job guarantee is a proposal rather than an existing policy. In today’s economies, some people are relegated to unemployment for the sake of containing inflation. So long as there is excess capacity and unemployment, it is possible to expand production through an increase in employment and the rate of capacity utilization. When appropriate, expansionary demand-side policies can be implemented to this end. At a certain point, however, bottlenecks are likely to emerge due to shortages of particular kinds of workers and raw materials. Although these bottlenecks are often possible to address through additional investment in capacity, this takes time. Meanwhile, the presence of bottlenecks can cause a bidding up of some wages and prices. Potentially, this could also intensify distributional conflict between workers and capitalists as both attempt to protect real income shares. In any case, as the economy gets closer to full employment, the proportion of sectors affected by bottlenecks is likely to rise, adding to the risk of inflation.

In the absence of an incomes policy involving direct wage and price controls, or a job guarantee, the likely government response to an inflation threat will be to adopt contractionary macroeconomic policies aimed at weakening demand in general, and with it, demand for labor-power and raw materials. Given time, this policy approach can succeed in eliminating inflationary pressure. But it comes at the considerable economic and social cost of unemployment. To the extent the policy approach works through a generalized slowdown in demand rather than attempting to address specific areas of the economy directly, it is likely to require more pronounced macroeconomic contraction and job loss than might be necessary under better designed policy.

According to the logic of the proposal, the pay and conditions of job guarantee employment would serve as a floor under the economy’s relative wage structure and set the value of the currency in terms of simple labor. A minimum wage (with benefits factored in) of $w per hour would mean that one unit of the currency commanded 1/w hours of simple labor power. Other employers would need to offer pay and conditions that were competitive with the job guarantee as well as commensurate with the complexity of labor involved in the roles required to be performed. Given the economy’s average level of productivity and on an assumption that firms largely set prices as a mark up over wage and materials costs, the wage floor set by the job guarantee would act as a nominal price anchor for the economy’s wage and price structure.

It is argued that the anchoring effect will be strongest when job guarantee employment as a proportion of total employment (referred to as the ‘buffer employment ratio’ or BER) is at its highest. During booms, the BER will tend to decline as some job guarantee workers are attracted into better paying positions in the broader economy. As the job guarantee sector contracts, the nominal price anchor will lose some of its influence on the broader economy, and other wages and prices might rise relative to the job guarantee wage as employers compete for workers. Because government would not compete on wages in an attempt to retain job guarantee workers, these wage payments would not contribute to the inflationary pressures developing elsewhere in the economy. Even so, a boom that continued long enough might result in demand-side inflationary pressure.

Much like under the current policy approach, this situation would be addressed by contractionary policies to moderate activity. But importantly, these policies would not cause involuntary unemployment. The negative impact on employment in the broader economy would instead cause a net migration of workers into job guarantee employment. The consequent increase in the BER would reinforce the nominal price anchor and help to keep inflation in check.

In terms of the discretionary policy response to inflation, clearly there is a resemblance between the current policy approach and the way policy would be conducted in the presence of a job guarantee. Under the current regime, policymakers think in terms of a rate of unemployment (the ‘non-accelerating inflation rate of unemployment’ or NAIRU) at which inflationary pressures first become problematic. With a job guarantee in place, the focus would shift to the proportion of job guarantee employment in total employment (the BER) instead of the unemployment rate. In principle, reference could be made to a ‘non-accelerating inflation buffer employment ratio’ (NAIBER). The NAIBER would be the lowest level of the BER still consistent with stable inflation.

Although the notion of the NAIBER is conceptually clear, Modern Monetary Theorists do not propose attempting to pinpoint its actual value. In reality, and as is true of the NAIRU, its actual value would be difficult to determine. Structural changes, by affecting the likelihood and distribution of bottlenecks, would affect the value of the NAIBER. Institutional changes, by affecting whether bottlenecks were likely to initiate wage-price spirals, could also alter the NAIBER. For instance, combining a job guarantee with an incomes policy might lower the NAIBER by enabling overall demand to be kept stronger without causing inflation. Pronounced distributional changes, by altering the pattern of demand relative to the economy’s present structure, could also alter the likelihood of bottlenecks appearing. Rather than trying to identify the precise value of the NAIBER, the point of relevance to policy is simply that demand-side inflation would be taken as evidence that the BER was too low and that contractionary policies were required. Of course, in the reverse scenario of a generalized slump or deflation, discretionary expansionary policies would be appropriate.

Modern Monetary Theorists maintain that the introduction of a job guarantee would give the economy a more effective nominal price anchor than currently exists. In comparison to the current policy approach, they point out that:

A simple depiction of the theory

The theory just described emphasizes two main sources of inflation. First, there are structural, institutional and supply-side factors (such as the skill profile of the workforce) that affect the likelihood and consequences of bottlenecks. These factors determine the NAIBER. Second, inflationary pressure is conceived as inversely related to the buffer employment ratio rather than the unemployment rate. When the BER gets too low, bottlenecks can arise, resulting in inflation.

A third potentially relevant factor, not touched on above, is a role for inflation expectations. These can conceivably influence the pricing behavior of firms and wage demands of workers. It is not clear, though, that expectations really play an independent causal role in the inflation story that has been outlined. Workers or firms might well expect inflation of five percent, but if they lack the capacity to raise their own wages and prices by five percent, prices in the end will not mirror their expectations. Conversely, if workers or firms find that they can raise their wages or prices by ten percent, they will hardly be constrained in their actions by an expectation that inflation will only be five percent. In either scenario, the critical factor will not actually be expectations. The critical factor will be whether workers and firms actually have the capacity to raise their wages or prices, and this capacity – in the theory briefly outlined – will depend on demand conditions (summarized as the value of the BER relative to the NAIBER) along with the structural, institutional and distributional aspects of the economy that influence the likelihood and consequences of bottlenecks.

The job guarantee would put an end to the inverse Phillips Curve relationship between inflation and unemployment for the simple reason that there would be no involuntary unemployment. Rather than accepting some unemployment as the price of containing inflation, loose full employment would be maintained at all times.

Although there would be no Phillips Curve, we could, if we wished, draw a similar curve to depict the situation with a job guarantee. I’m not sure if such an exercise would be exactly MMT kosher but it seems that we could define a function with inflation inversely related to the buffer employment ratio (BER) rather than the unemployment rate. A simple representation would be:

with πt the inflation rate of the current period, π0 exogenous inflation and f a function describing the sensitivity of inflation to excess or deficient demand.

With BER < NAIBER, there would be excess demand and inflationary pressure. Demand deficiency and decelerating inflation would occur with BER > NAIBER. 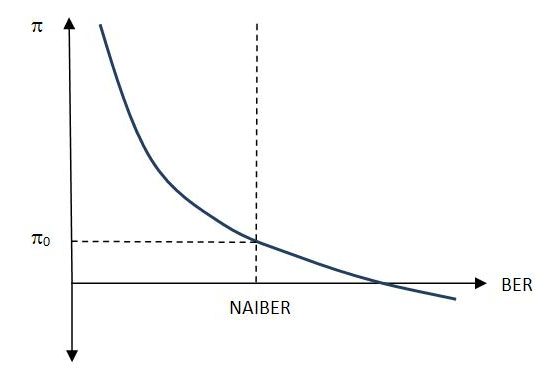 The curve gets flatter as the BER increases to reflect the view that the influence of the job guarantee’s nominal price anchor will be at its weakest when the BER is near zero and stronger when the BER is high.

During a boom, the economy would move along the curve, up and to the left, as the job guarantee program was deprived of workers and the BER decreased. If policymakers did nothing to constrain demand, the theory suggests inflation would rise. If, instead, policymakers implemented contractionary policy, as appropriate, this would help to bring the economy back down along the curve toward the NAIBER.

An increase in exogenous inflation emanating from the supply side of the economy (for instance, an oil shock) would cause an upward shift of the entire curve. For any given BER, there would then be a higher rate of inflation. Here, too, it might be necessary for policymakers to implement contractionary policy to compel a less inflationary resolution to conflict heightened by real income losses associated with the supply shock.

A significant change in the economy’s structure or institutions could cause the NAIBER to shift either left or right, depending on whether the structural change made the economy less or more prone to inflation.